The first day of racing of the Gareloch Championship Weekend. Ten boats competed in the four races of the day.

Race Officer Dick Taylor, aboard The Dicken Family’s Tegwynt, set courses with first legs beating to windward up the Shandon Shore. In the morning, tide was ebbing so that a fine balance was to be had between better wind in the loch and less adverse tide on the shore. Variability in strength and direction of wind complicated the issue. Galatea, Zoe and Catriona were on the pace and finished the first race in that order.

The second race included a reach to C, off Clynder. Catriona rounded the windward mark first with Galatea and Zoe following. Not for the first time, Catriona sailed for the wrong mark, a mooring a little up the loch from C. Galatea followed but Zoe got it right. Lighter wind in shore allowed Zoe to overtake to leeward and take the lead.

In the afternoon, American Pilot Thad Burr joined Catriona. The third race began with a beat to D, north of Clynder. As Catriona sailed towards the Clynder shore, Thad warned her helm of the rest of the fleet being lifted further out in the loch. To no avail. She rounded D at the back of the fleet. Teal in the lead. There was no overtaking on the reach across the loch but boats did close on each other. Downwind back to the starting area some benefited from their spinnakers more than others. The first leg of the second round was a little fine for spinnakers. Teal made hers pay but all the rest who tried to keep their third sail lost by it. Particularly Galatea and Athene, who compromised her second place. Catriona somehow got back into the fray and finished second behind Teal.
Before the last race of the day, Zoe was leading with Catriona one point adrift and Galatea a further point back. All knew the importance of the fourth race. The tide had turned now but tacking up the Shandon shore was still not simple. There was still advantage to be had by going inshore. Catriona rounded first for the run to the finish. This turned out to be key. Further back there was blanketing and judgement needed over the timing of gybes. Thalia found speed near the finish to take second. Teal third. Galatea and Zoe, who were strong for most of the race slipped to fourth and fifth.

It was much better weather than was forecast. Good wind and the rain stayed off until we had gone in for lunch.

For the two races this morning, Dick Taylor took Tegwynt to C, at Clynder, for a windward-leeward course to the club and back. In the first, Catriona was taken past the windward mark by Galatea. She should have been conservative and have gybed out, but leopards do not change their spots. Anyway, she luffed to try and force the issue and was protested by Galatea for tacking. The penalty turns were taken in light air with the rest of the fleet approaching. She finished that race sixth.

In the final race, some played the changeable air better than others. Notable was Teal who gained places on the final windward leg (to a finish of the club) and took another first place.

Athene had been battling with Thalia. She was in contention on Saturday evening but two poor results on Sunday put paid to that.

Overall, the results were: 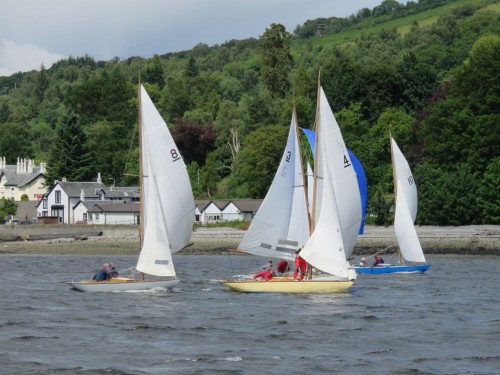 More pictures will be available in the Gallery

This entry was posted in Race Reports '15. Bookmark the permalink.