The Gareloch One Design Dione after its three year rebuild was formally relaunched by Gordon Mucklow, President of the Class Association at Rhu Marina on Friday 21st. Retired Royal Navy engineer Bill McLaren who led the rebuild had dressed the yacht with Navy signal flags which read “Welcome Dione”.

Peter Proctor, Class Convenor, welcomed the many guests to the relaunch. Current and former Gareloch sailors and owners were well represented. Many from the wider sailing community attended. Friends from the other classic classes the Mersey Mylnes, Howth 17s and the Yorkshire One Designs were there. Dorothy McGruer, one of the last surviving members of the McGruer family who built the Garelochs in 1924 was there. Several former owners of Dione attended, including Donald Hardie who owned Dione in 1958-59. 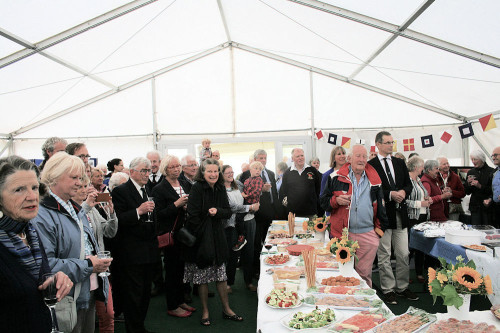 Guests at the Dione relaunch event

The former owner and former boat builder who started the restoration some thirty years ago was there – David Spy. He had made two half models of Dione at the request of the Class Association. David owned and restored several Garelochs and worked extensively on ten of them. David is now a highly regarded model maker with many clients across the UK and in the US. One of his models is on display in the New York Yacht Club.

Presenting the half models to Bill Mclaren and Tim Henderson, Peter Proctor said: “Words cannot express our gratitude for what you have achieved in this rebuild. It seemed at times, especially in the later stages, you had no alternative life, I have been overwhelmed by your dedication to the project.”

Presentation of half models

Bill accepting the models joked that “both he and Tim now felt like fathers handing over their daughter in marriage, on the one hand relieved to see the back of her after the torrid teenage years, but also anxious that she would be properly looked after.” Dione’s new owner Barry Choules made all the proper promises.

Rhu Marina have been a key supporter of the project and the Class, their Yard Manager, Eddy Young presented the new owner with the “keys” to Dione, and a small box of sawdust. When the Garelochs are lifted back into the water in the Spring it is an anxious time, they often leak badly initially. Gareloch owners and the Marina crew have developed a technique for holding sawdust over the leak until the water sucks it in and the leak stops. 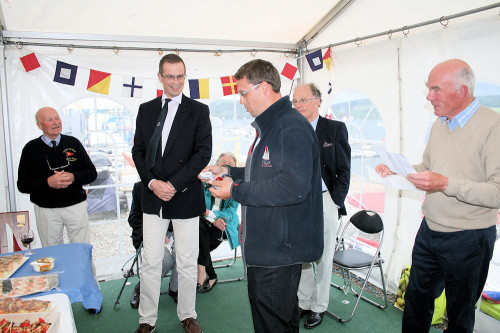 Dione won the first ever Gareloch Class race in 1924 under her first owner Agnes Stephen of the Stephen shipbuilding family. Agnes’ nephew, Sandy Stephen, spoke at the relaunch. He remembered Agnes’ generosity in sharing Dione with her nieces and nephews. He had sailed on Dione as a child in the 1930s and remembered many happy times. 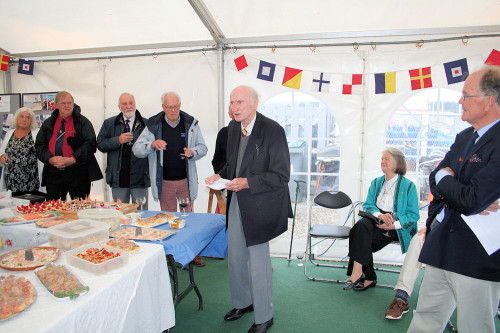 Sandy Stephen shared memories of Dione in the 1930s

An exhibition on Agnes Stephen had been mounted at the relaunch. Agnes was one of the first women to receive an economics degree from Cambridge University. She trained at Glasgow School of Art and was an artist of some ability. She trained in social work and worked with the Women’s settlement in Anderton. In later life she was a Girl Guide Commissioner, and County and District Councilor. Agnes presented the prizes at the Class’ 50th anniversary in 1974. She died in 1989.

Dione joined the first race of the Gareloch Annual Championships on Saturday 22nd. The conditions were difficult with strong gusty winds, grey skies and rain. She acquitted herself respectably in Tim and Bill’s hands. She made a good start, up there with the leaders. Peter Proctor commented after the racing that “it was a fitting climax to three years dedication and hard work. It was great to see Dione back on the water”

This entry was posted in Boats, Dione, Site News. Bookmark the permalink.