A final report from Bill McLaren and Tim Henderson to conclude their successful and hugely appreciated 3 year project!

This final report tells the story of the end game of the Dione restoration project and covers the period from December 2016 through to her launching in July 2017. It was an exciting and busy time as three years of hard work finally came to fruition.

The first step was to complete the deck by fitting covering boards around the deck edge.

The deck awaiting the covering boards to be fitted.

The sheer strake, or top plank of the hull, was doubled with filler pieces between each rib, to which the covering boards were screwed with a mastic bedding. The joint between the inner edge of the covering board and the deck was made with epoxy. This required precise wood work to get a good fit and the result was very pleasing.

The covering boards at the bow. 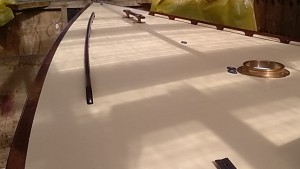 We then turned our attention to the construction of the cockpit and cuddy. We first had to design the cuddy to meet the class rules and to form an elegant and strong structure. The first step was to shape and fit the cockpit sides

The port cockpit coaming is screwed into place 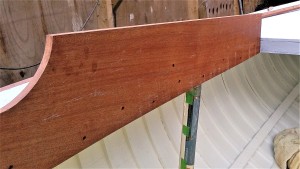 We then fitted the forward and aft cockpit coamings with corner bracing pieces to strengthen the structure.

The main structure comes together 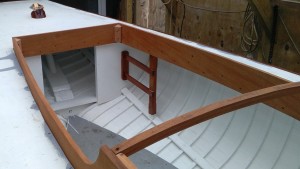 The cuddy deck beams were laminated from strips of mahogany and moulded over a former to give the design curvature.

Detail of the cuddy construction 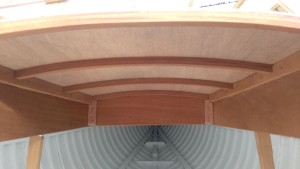 The cuddy deck was laminated from two sheets of 6mm plywood and screwed and glued to the cockpit edges and cuddy deck beams. This created a very strong and stiff structure.

Finally the cockpit and cuddy was varnished in preparation for fitting the deck hardware.

The completed and varnished cuddy structure. 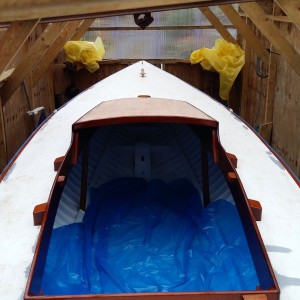 There was a lot of deck hardware and we had underestimated the cost and time involved in procurement and fitting. Tim took the lead and we tried to follow best practice from the most successful boats in the fleet, using modern equipment.

Dione’s mast had been in storage for many years and appeared to be sound. However more detailed examination showed serious flaws and rot in critical places and we were forced to condemn it. Due to short timescales, a mast ‘musical chairs’ resulted, and Dione finished up with a brand new mast which had been built for Iris but not used. A second unfinished mast made at the same time as the one for Iris was completed and went to Iris. Finally Dione’s original mast was rebuilt in slow time and now forms a class spare.

Having overcome this last minute crisis we had only to complete the final painting and varnishing and the job was done.

As the shed was dismantled it became possible to see Dione in full perspective for the first time since work started three and a half years ago.

At the marina she was rigged and prepared for her return to the water after some 30 years.

And most importantly her name was painted on the transom 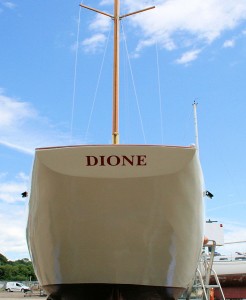 She was launched and floated to her marks. She took up quickly and after about two days was scarcely making any water. It was good to see her afloat.

Finally, a copy of the slides and photographs used during the Dione launch party. (NB. for download but approx. 156MB!)

This entry was posted in Boats, Dione. Bookmark the permalink.