We are now some 15 months into the Dione restoration and thanks to all those who have helped with everything from paint stripping to rib installation. A particular thanks to John Willis, sometime Gareloch crewman, who has brought his professional woodworking skills to our aid.
We had a steep learning curve on ribs. Ribs would normally be installed against a bare hull but we had added difficulty of getting them behind the beam shelf and the stringer. A good steam box was essential to really cook the rib, but there still wasn’t much time to get them into place before they cooled and could no longer be bent. However we got the knack and now have about half installed. 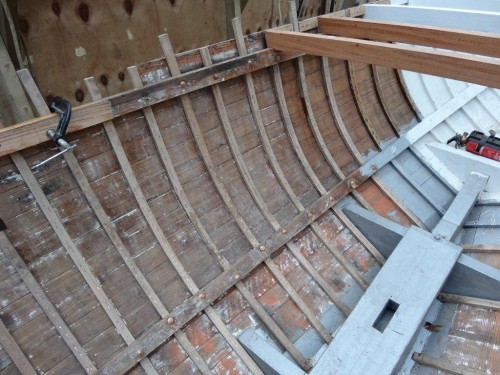 New ribs on the port side

At the same time we were rebuilding the chain plate area on both sides and installing new stainless steel chain plates.

By this time we had removed the last of the deck in the cockpit area and discovered that there was much more damage to the beam shelf than we had thought. Much of this was due to corrosion from ferrous fasteners, but in one place, almost unbelievably, the beam shelf had been cut most of the way through. I can only assume that somebody had been careless with a saw, presumably when repairing the top plank or sheer strake.
With the wisdom of hindsight it would have been better to replace the entire beam shelf but by this time we were committed and I decided to fit a doubler in the bad areas.

Meanwhile John Willis had done the final fitting of the bottom planking and Tim had been getting on with a complete reconstruction of the stern area.

Tim at work on the stern

Fortunately it was possible to retain two of the bulkheads which gave control of the hull shape but it required very detailed fitting of the remaining bulkheads and the transom. But finally it was done.

So we are now well on with the hull. We have about 30 ribs and the remaining lengths of sheer strake to fit and then it will be structurally complete. It will then require caulking, filling and fairing.

Overall view of progress so far

Then we will get on with the construction of the deck, cockpit area and cuddy and the procurement of the wide range of missing fittings, ranging from the rudder (under construction by John Willis) to the bow fitting and pretty well everything else in between.
So far the project has taken 670 man hours including building the shed.