Stage 3 – The Beginning of the End

It is six months since the last update and we have made a great deal of progress due to good weather in the late autumn and the bonus of Jon Reid joining the team.
The first step was to complete the hull and she is now fully caulked and stopped with mastic. She will be left like that till the spring for the stopping to harden off before final fairing and painting.
Caulking wasn’t easy. In an ideal world the plank edges should be bevelled such that edges form a wedge into which you can drive the caulking – and the gap shouldn’t be too big. A glance at the photograph below shows that the gaps were generous and that there wasn’t much bevel. It was all too easy to drive the caulking straight through, which defeats the object of the exercise. 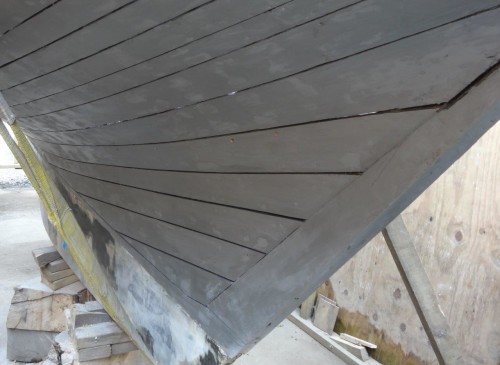 Wide gaps between the planks to be caulked.

After some professional advice we caulked gently and with great care and are hopeful that the stopping and internal paint will hold everything in place till the hull takes up and the gaps reduce. If not, there is going to be a lot of pumping! 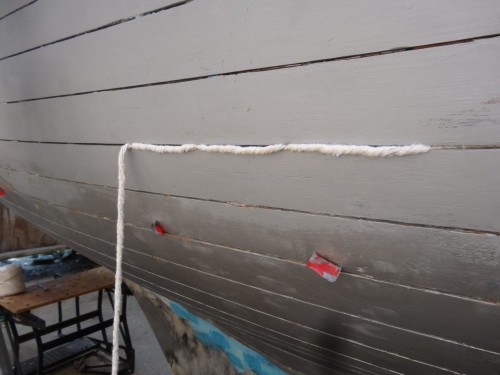 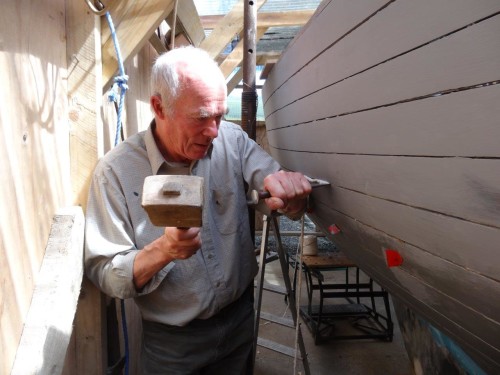 ……and gently driving the caulking home.

They say that boat builders are like economists; when you put two together you get three conflicting opinions. That was certainly the case over stopping the caulked seams. There were advocates for traditional white lead and putty, for modern polymer mastics and for a range of other materials. We had to take into account that the hull is going to settle and move when she is afloat and the timbers are going to take up as the moisture level rises. So it is certain that she will need a new paint job after the first season and there was not much point in paying for expensive stopping, which would need redoing. So we opted for a cheap oil based mastic out of the local builders merchant. 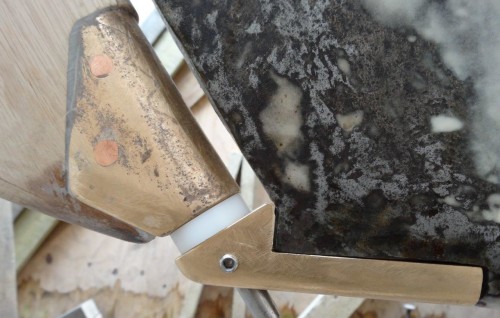 We lowered Dione back to ground level and painted the inside of the hull with primer, undercoat and two coats of gloss paint. 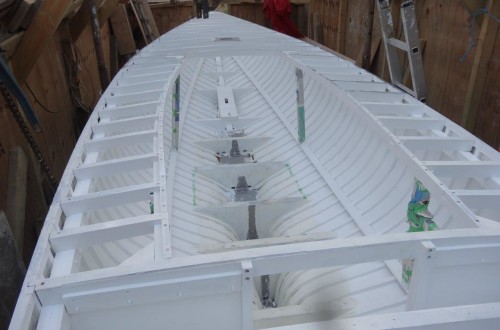 We had already done a trial fit of the deck panels when aligning the deck beams. It was now time to fit them permanently and we screwed and nailed the panels to the deck beams leaving an accurately cut 35mm strip round the deck edge for the varnished mahogany covering boards. 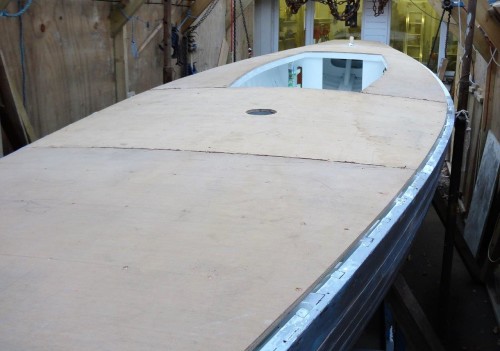 The newly fitted deck and …….. 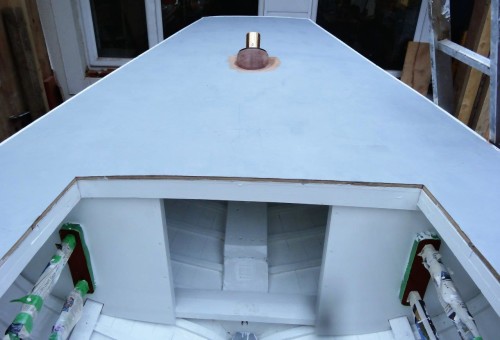 …..the after deck in primer showing the rudder head fitting. 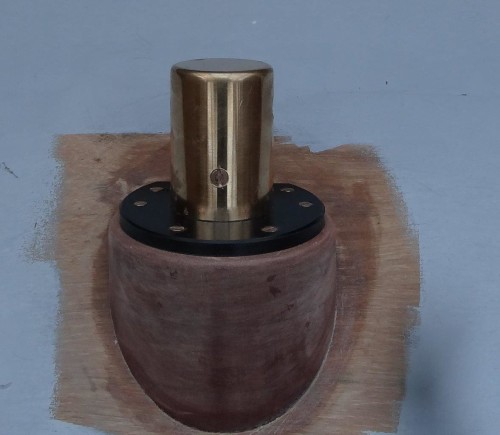 The rudder head fitting in detail.

Procuring custom made metal fittings, particularly high quality bronze, is a problem for classic boat restorers. So we are very grateful to the Drysdale Brothers foundry in Larbert, who donated the rudder castings along with the mast ring and bow fairlead fittings.
We have now cut the covering boards and they will be fitted shortly, followed by the cockpit coamings and cuddy. At this point the Dione restoration will be structurally complete and all that will remain to do is final finishing, fitting of deck hardware and sorting out the mast and rig.
So far some 1200 man hours have gone into the project including the original construction of the shed. Dione will have her third birthday at Rowmore Cottage on 31 January 2017 and we expect that she will be afloat in the summer.