Because Zephyrus did not go into the water before the end of May and with the season closing in September, 2013 felt like a rather short season for Zephyrus. This combined with holidays and few week‐ends away, we ended up not completing any of the series (what I mean by this, is that we always had too many DNCs to be able to discard them).

It may have felt short, but it was good. As anticipated we had and still have a lot to learn, both from the boat and from the water. She definitively does not sail like a dinghy and whereas she can keep the smallest of momentum going in light wind, she can take quite some effort to regain that momentum if she has been stalled. This is most evident during tacking manoeuvres. The water or more accurately the winds on the Gareloch are a mystery unto themselves and, if it was not for Charles’ consistency, one would think that a win could simply be in the hands of Zephyrus (the God, that is, not the goddess) with the winner simply being the boat in the right place at the right time.

Regarding the refitting of Zephyrus and her set up, below is what has and has not worked for us:

What has not worked:

So, in order to have Zephyrus in the water for the start of the season, I took her out as soon as I could which ended up being mid‐October, giving me a 2 months head start compared to last year. I have always said when I bought Zephyrus that it was probably a 5 year project to get her where I want her to be. Last winter was focused on the outside, this winter is to focus on the inside in addition to the standard maintenance to be expected at the end of the season. I am not planning on another 500 hours this winter however, more like 300 hours.

Below are some pictures of Zephyrus coming out of the water and I was pleasantly surprised at how clean she was overall, with a limited amount of caulking having been squeezed out from her swelling. I will probably raise the water line by an inch or so for next season. 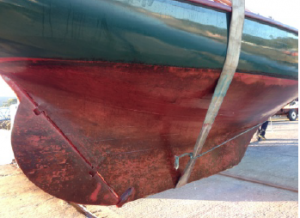 Transportation to her ‘winter home’ went well and work started in earnest. The picture below shows her with all her fittings removed. The most interesting thing is that it only took me 4 hours to undo last winter refit that took me days to do. 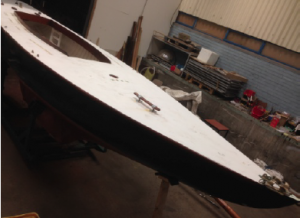 The advantage of the removal cabin is the room for working that it creates once removed. After a review of the state of the boat with Chris and with the various leaks in mind, we decided that the further aft floor needed replaced and some of the caulking renewed. On that basis I was also intending to put a new floor in, last season was sailed in WBP ply, and to go for a teak floor as she was originally being a Forth OD. This was not to be, more on this later.

These pictures show the floor being removed and replaced. 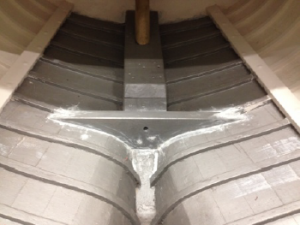 The plan for the inside is as follows:

Below are pictures of the ongoing preparation work. The actual bilge (red) was done last year. 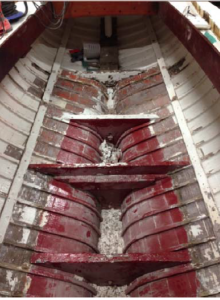 It is at this point that the plan went pear shaped. While washing the inside of the boat before starting the work, I had noticed water coming out near the mast step position. It is from this that we decided to re‐do some of the caulking. However, when Chris started to take the old caulking out, the plank beside it completely fell apart, it was actually rotten. Planks 1 and 2 were replaced last year on both sides and it turned out that this year plank 3 needs also to be partially replaced on both sides. Also while working on the inside and removing the plank which is above the floor, below the stringer on each side, I found damaged frames. This was related to the lack of protection, the size of the screws used in relation to the frame size and the stresses the frames are under. All together 8 frames had to be repaired, 4 on each side, while another 8 had to be reinforced with epoxy. This meant the end of the teak floor which will have to wait until next winter. So the 2014 season will be sailed on WBP ply after all.

I will provide more details on the frame and plank repairs in the next instalment.