As mentioned in the last instalment, we ended up repairing eight frames and reinforcing another eight. I took care of the reinforcing while Chris tackled the repairing.

Reinforcing was done with epoxy loaded with microfibers as it stopped the epoxy from running without the need for silica and it will provide plenty of flexibility to the epoxy when the frame will flex.  Repairing was done by removing the damaged wood and scarfing a new oak frame section with a scarf angle of 10:1. Epoxy was used to laminate the repair and the planks were later refastened to the repaired sections with copper nails as per original.

Below are the various stages of the repair: 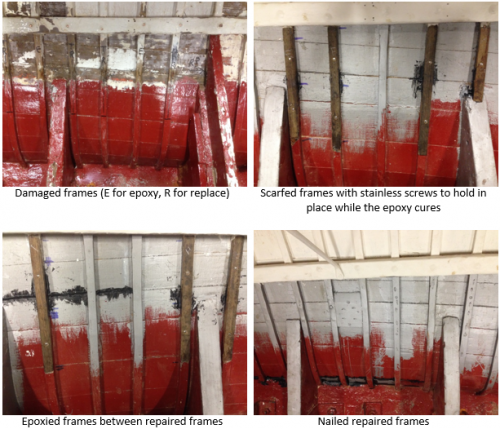 On the bottom left picture, one can see a wooden block (butt block) between two of the frames. There are several of them on Zephyrus’ starboard side. They are here to reinforce joints in the planking which would intimate that something happened to her on the starboard side as four planks had to be repaired in such a manner. Did she go aground and ended up lying on her starboard side on some rocks, or did she have a collision, as one of the top planks has also been repaired like this.

The planks were also caulked from the inside with a polyurethane filler as can be seen on the bottom left picture above. Being inside, this was not done for water tightness but for cosmetic reason and also to prevent water to gather and stagnate in these gaps with the potential to start rot, especially rain water.

The picture below shows how the rudder post brass tube was polished and the wooden post holder faired. Pitch was also used to fill the bottom corner of the frames to stop water stagnating in these areas.

Regarding the plank repairs, oak plank sections were scarfed in, nailed to the frames and screwed to the floors, caulked and primed. The pictures below show the various stages of the repair:

The inside was finished as planned with top coat above the stringers and bilge paint below. In addition the seat arrangement was removed and new posts were put in place in order to support the deck where the helm and crew sit. We sailed last season without the seat in and intend to do the same this season. I like the uncluttered look that removing the seating arrangement provides. Full visibility of the stringers also reinforces the nice curve of the hull. I am however planning to reinstate some sort of seating arrangement during next winter refit (you may have noticed that between this and the floor work, next winter list is already growing!).

Below are pictures of the finished cabin which still needs to be re-fitted with pumps, blocks, floors and blocks. Regarding pumps, as well as the manual pump, I intend to have a permanent pump on a battery on Zephyrus. We had it last season and it needed to be re-charged only once in the season (70Ah battery). The hole you can see in one of the floors is for the outlet pipe. The outlet will be behind the cut-out frame you can see behind the rudder tube.

I have now moved on to the next stage of the refit which is the outside, starting with the preparation of the deck, then above the water line with some fairing, to finish below the water line with a bit of keel grinding to do where rust has broken through.  Re-painting will start when it has all been prepared. All this in the next instalment.