Diary on the restoration of Zephyrus – Part 10

Following a gap year in the Zephyrus restoration diary, I thought I would write one this year since I have reached one of my milestones in her restoration programme and that is, to have the inside and the deck restored.
The inside of the boat has now been fully stripped and re-coated. This was done over several winters (see previous dairies), starting with the frame and planks below and then above the floors, moving on to under the deck forward of the mast to under the deck aft of the mast this winter. The end result can be seen below. 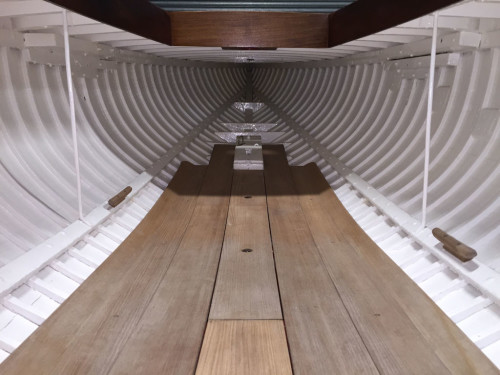 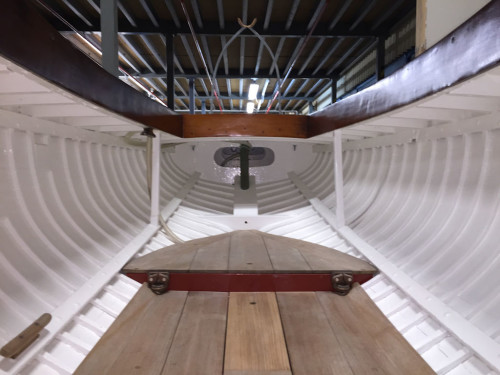 What can also be seen in these pictures is the new floor that I asked Chris Ings to make last winter. Teak was selected on the basis that Zephyrus, originally Cockleroy, was a Royal Forth One Design and the only difference with the Gareloch One Design is that the Forths had a teak floor whereas the Garelochs had a white pine floor. I asked Chris to do this job for two main reasons, one is that teak is rather expensive and any mistake can be costly, after all I am still an amateur at this. The other is that one has to recognise when one skills fall short of the job and this job needed the skills of a professional shipwright.
The challenge was the following one. During the restoration of Zephyrus, you may remember from a previous diary that several ribs had to be repaired. The reason was that the plank, which sits between the stringer and the floors with the purpose to protect the ribs from the feet of the sailors when heeled, was screwed to the ribs. The problem with this was that the ribs end up rotting where the screws are, creating weakness points where ultimately the ribs break. So after repairing the ribs I did not want to screw the plank back in the ribs again and so came up with the solution to add a ‘wing’ to floor board 1 and 5 so the protecting plank is attached to the floor rather than the ribs with the additional advantage that maintenance is easier in the winter when the floor boards are removed. Whereas the solution was fairly straight forward, its implementation was not. Indeed, the floor/wing combination needs to follow 3 different and independent curves: the curve of the floors aft to forward, the vertical curve of ribs up and down and the curve of the hull aft and forward. Think about a rugby ball to visualise all 3 curves. Not something I fancied tackling myself in teak.
In addition to this, I did not want to screw the floor boards to the floors as (i) I struggled with the idea of seeing screws in these nice teak boards and (ii) I wanted to be able to remove the floor every winter for maintenance as well as anytime at sea in case I needed to investigate a leak or lift them for any other reason. So only boards 1 and 5 with the wings are screwed to the floors, boards 2 and 4 are held to the floor from underneath using locks with wing nuts that can easily be undone at sea with sailing gloves on. Board 3 also has a wing nut system, which has been recessed and can also be unscrewed with gloved hands at sea. They are recessed as another purpose for the floor was to provide a comfortable base for sleeping on when we cruise. As demonstrated by Pete below, this works nicely. 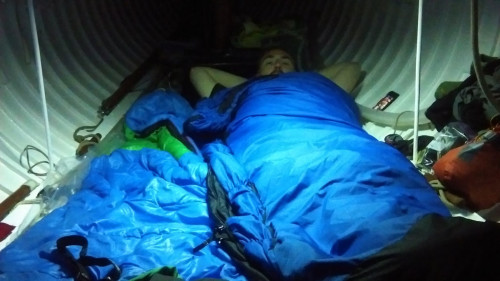 Getting ready for a good night sleep, looking forward

Deck wise, most of the fittings have been finalised two winters ago (see Part 8) the only improvement last winter was the addition of a brass band on the top of the coaming as it gets damaged during the season by either the sheets or by sitting on it. This winter I have also changed the tiller handle to leather (see below) as the rope design of last season did not last and the wood option of the first season also proved unsuccessful. 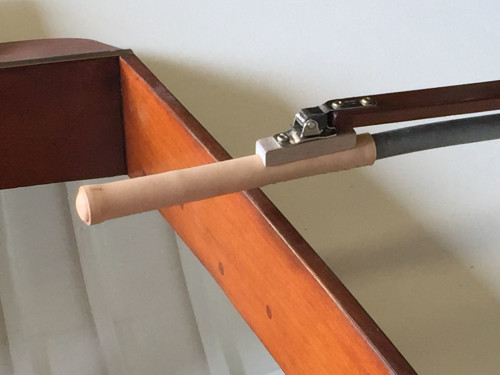 Tiller handle and brass band on the coaming

The other item which I think has now been finalised is the cabin/coach roof. Zephyrus has always had a removable cabin and this is a major benefit for winter maintenance. The space and the ease of work that result from removing the cabin is significant and by making the work easier, it is more likely that the work will get done. It also helps in the maintenance of the cabin itself. Whereas we have never done it during the season to increase cockpit space, it only takes five minutes to remove the cabin. Another reason we have never removed the cabin while sailing is that Zephyrus’ coaming was missing its forward section or wash board. This proved to be an issue while cruising as the seal between the cabin and the deck was never tight enough to keep the water that was washing over the deck out of the boat. In addition Zephyrus had a hatch on the coach roof which was held in place by bungee cords and whereas this was enough when racing, again when cruising it was a significant source of water ingress with water falling on the crew doing the chart work below.
Following all this, I decided to keep the cabin removable, screw and seal the hatch to the coach roof, add a beam for reinforcement and re-instate the washboard. Because the cabin goes outside the coaming, the washboard has been set vertical rather than inclined forward as a wash board should be. The finished cabin can be seen below. 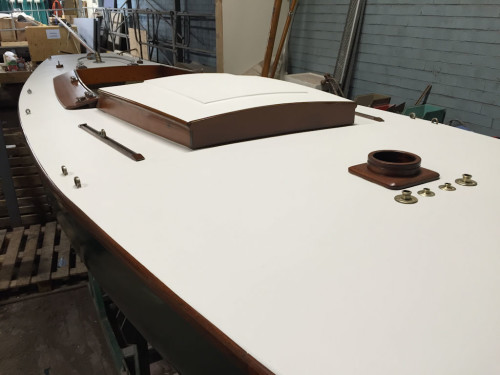 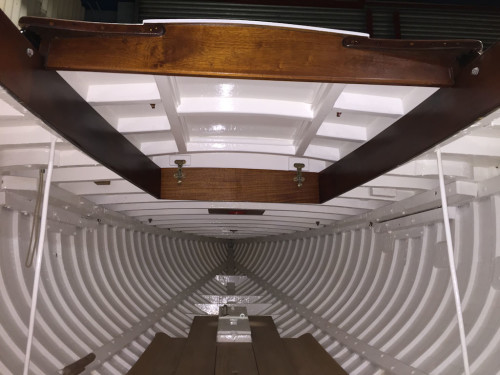 For next winter, the programme will be focused on the outside of the hull and the sails.
For the sails, I am grateful for the change of the rules by the association now allowing mitre cut sails so I can continue to restore Zephyrus as close as reasonable to the original design. The intention is therefore to have a mitre cut jib as can be seen below from J.G.D. Henderson’s book ‘Gareloch Goddesses’. 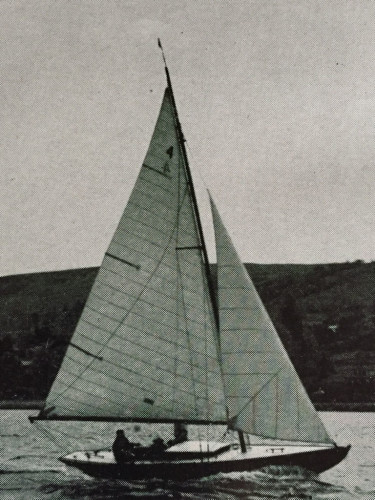 In addition to a new mitre cut jib, Zephyrus will need a new mainsail, not only because the current one has done more than its share of racing seasons (it is actually a handover of one of Charles’ old ones), but because, as a racing sail the battens are at an angle that prevents adequate reefing and proper flaking. Whereas this is not an issue for can racing, it can be for passage racing or cruising.
We experienced the issue last season during the race to Tighnabruich organised by the Royal Western Yacht Club to celebrate their 140th Anniversary when strong wind (force 5-6, gusting 7) meant that we had to put a reef in but could not go lower than the first batten. The other learning point from this race is that with the standard jib and a deep reef in the main the boat becomes unbalanced and our beating tacks would have been better and easier on Zephyrus if we had a smaller jib. The intention is to have the old jib re-cut accordingly as a ‘storm’ jib.
When cruising to Largs last year we did not need to reef but it was borderline. The most interesting thing during that cruise is that whereas it took us 7 hours of beating against the swell and for some time the tide from the club to Largs marina, it took only 4 hours on one single tack from Largs to Rhu to come back the next day with the wind veering with us as we sailed north. We would pay for it few weeks later during the RWYC race when we had to beat all the way south to Toward point as well as North through the Kyles of Bute. Tim Henderson kindly towed us back the next day when the strong wind of the previous day had disappeared.
Zephyrus is now back in the water and we are looking forward to another season of racing and cruising.
Fair wind to all,
Eric