As mentioned in the last instalment, the outside, i.e. deck and hull were to be tackled next.

I started with the deck. When the boat came in last October, the deck was stripped of most of its fittings. So the deck was first given a sanding and a re-coat of anti-slip paint (two coats of Interdeck). 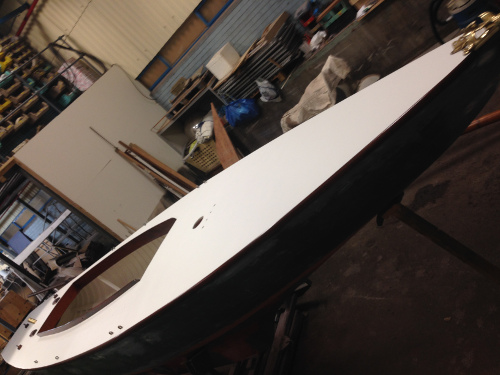 The fittings were then polished and re-fitted. The main changes from last season were, starting from the bow: 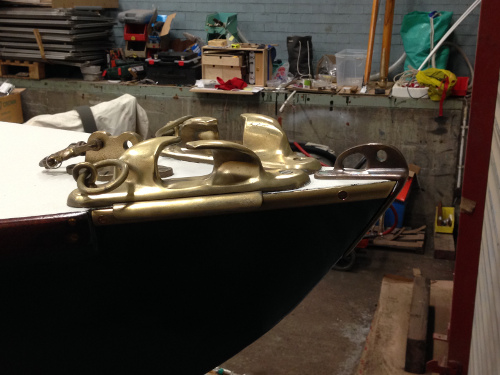 The tack of the jib last season was secured with a standard D shackle. I have changed it for this season to a snap shackle for easier sail change.
The mooring cleat was changed. Changing the cleat allowed to downsize it, bring it forward, more in line with the original drawing and to centre it on the deck. The previous one was decentred, which made sense to minimise chafe on the forestay when the mooring line came over the bow, but now that Zephyrus has port and starboard mooring fairleads, it makes sense to centre the cleat as it is more aesthetically pleasing. 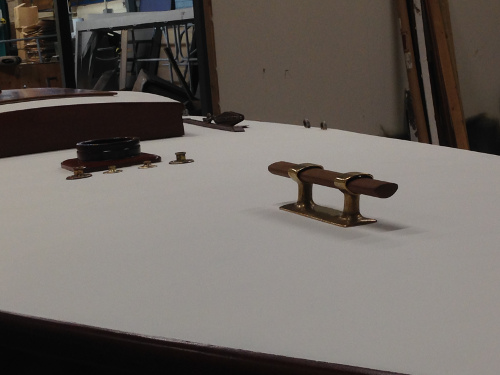 A base for a mast boot has been added as I am intending to fit a boot on the mast this season. 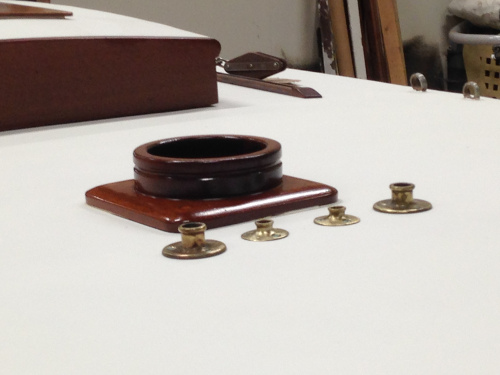 Mainsheet blocks: these have been changed for one size up in order to decrease the level of friction in the sheeting system. Two of the blocks have also been changed to swivel blocks to help the mainsheet settle under tension. 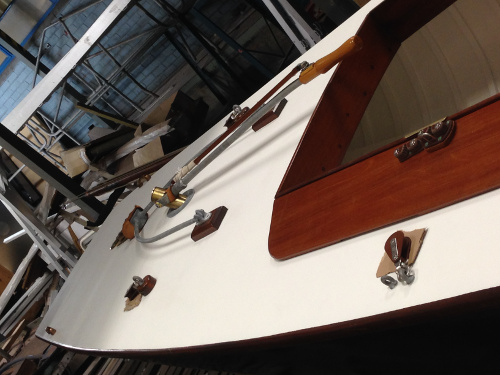 For attaching the tiller to the rudder post, a smoother locking system has been designed replacing the old bolt and nut system that used to catch the mainsheet last season.

I have added a flagstaff socket which has been placed as far aft as possible without impacting the stern structure and without being protuberant above the deck as it would have caught the mainsheet. As a side note, I have been investigating, with John’s support, the correct ensign the boat should wear since she is not UK registered. Should it be the ensign of the country she is located in or the ensign of the owner’s citizenship? 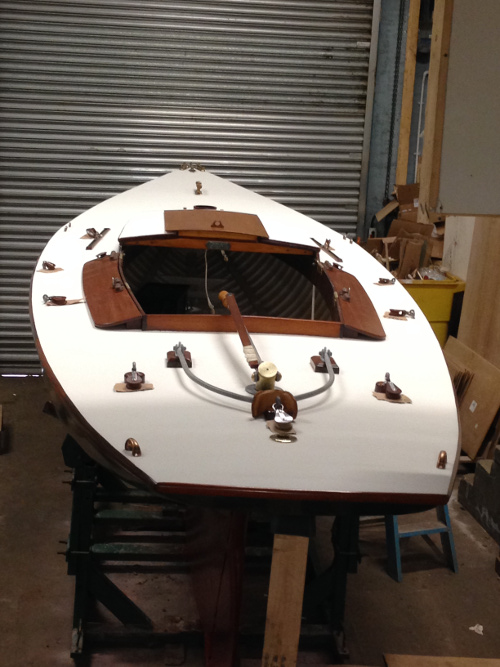 Smooth, not catching spinnaker fairleads have replaced the old ones to stop the mainsheet being caught when jibbing on the run.

Finally, as a birthday present for the old girl, a brass plate has been added on the top of the rudder post. 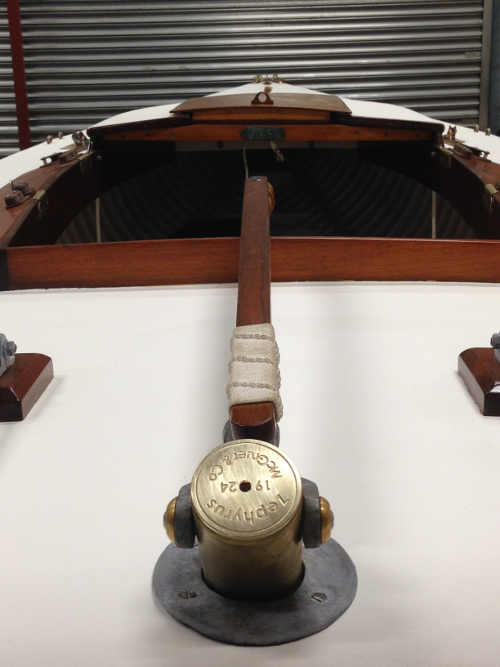 I had been toying with the idea of modifying the cabin as I think it is a bit too ‘boxy’ and it may look better if the front was one inch lower to give it a more pronounced slope forward. In the end I decided to wait until next winter (another one for next winter!). It is definitely an advantage to have it removable for working on the boat during the winter. I have also not made my mind up yet on the value of the hatch. For those of you that may be wondering what can be seen on the hatch, it is the compass holder.
Below are pictures of last year’s deck and this year’s deck: 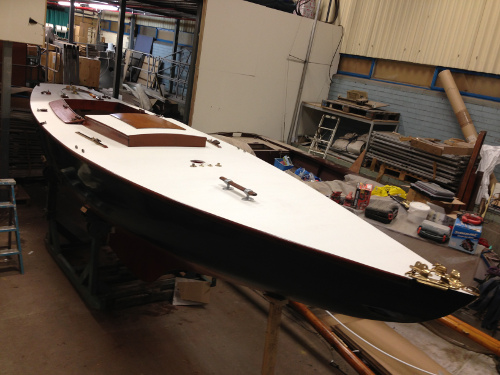 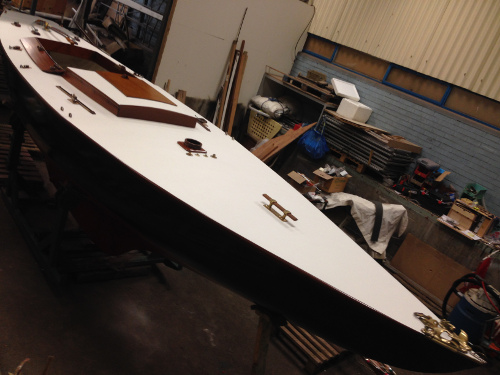 As far as the hull is concerned, it was sanded, faired where the planks had open slightly or where it had been damaged (thanks Ceres!), primed (primocon below the waterline and pre-kote above it – one coat each) and painted (cruiser uno below the water line and toplac above it – two coats of each).
Whereas the water line was left in place at the bow and stern, it was raised by one inch amidship as it is where fouling occurred as can be seen below when Zephyrus was taken out at the end of last season. 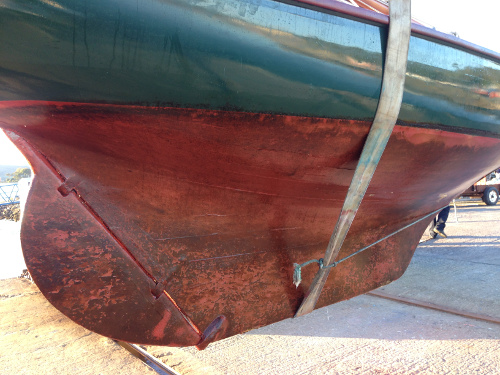 The finished result is shown below, including the slightly ‘boxy’ look of the cabin. 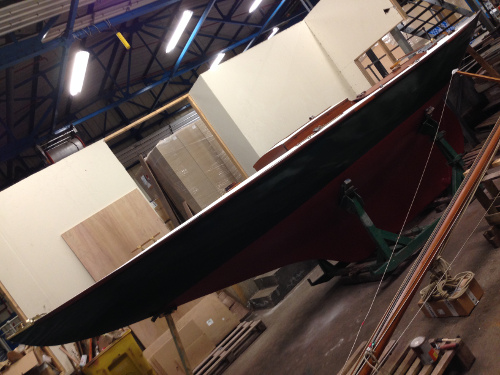 In the picture above, one can see that work is now ongoing on the spars. What I did with the spars will be for the next and final instalment for this year.