A team of Gareloch One Design sailors from the RNCYC raced against a German team on Lake Starnberg, Bavaria, near Munich over the weekend of the 29/30 September.

There were near perfect conditions, force 3 gusting 4 and warm sunshine. International Dragons, a former Olympic class, had been loaned by local owners for the event. These beautiful and agile boats made for keen racing.

This regular exchange race with FKY (the German Classic Yacht Club) was first raced at Rhu in 1999.

The first race set the tone for the series. The Gareloch crew in the oldest Dragon were squeezed at the start and took an instant penalty. The Germans’ crack helmsman made off to finish first, but left his team behind to be harried by the Garelochs. With the best combination of places the Garelochs won this and the subsequent races  –  7-nil at the end.

The German Touring Yacht Club at Tutzing ran the event with great professionalism and sponsorship from Budweiser. The FKY sailors had come from all over Germany and were as always warm and hospitable.

A strong friendship continues between the clubs. After the racing, the Garelochs didn’t think they had won all the races. Winning them all was perhaps undiplomatic, but in the words of the Gareloch’s inimitable team captain, Charles Darley, “winning isn’t everything but we didn’t come to lose”. Lars Münch, the FKY’s event organiser put it graciously, “races lost, friends won”. 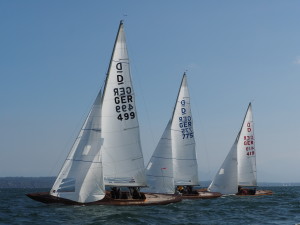 This entry was posted in Race Reports '18. Bookmark the permalink.